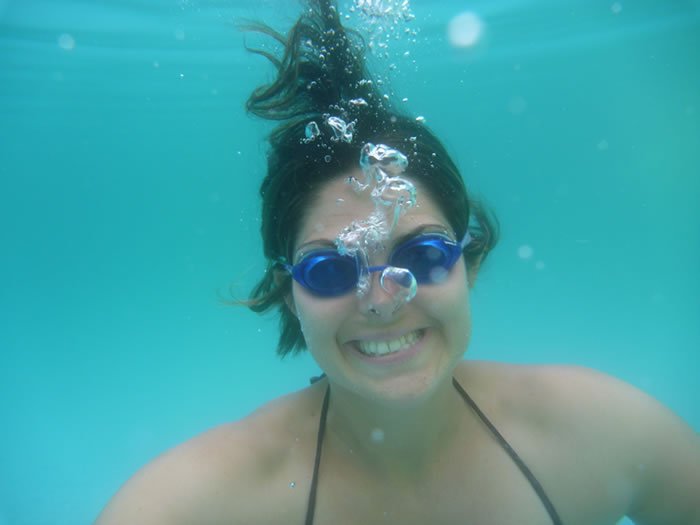 Swimming Women is for all women who can swim, used to swim, want to swim, or have never swum. It is my attempt to capture the energy, passion and fun I have gained from swimming and share it.

I promise it will not be scary, or if it is you won’t be alone. I promise there will be shared huffs and puffs and giggles and if I have my way, together, more women will taste more chlorine and salty water, where ever they are.

My goal is to help, enthuse, coach, motivate, and share my love for the water. I hope you care to join me.

I have been swimming since I was taken to school holiday programs at a local primary school pool, complete with verruca bath and shower free draughty changing rooms. I was 5 and it was England at the birth of the 80’s. I have been coached by almost 20 different people since, and almost half of those coaches have coached people to an Olympic games. Alas I tried but was not one of those athlete. I did however learn a wealth of information from those fabulous coaches. There were times when I didn’t like them…that guaranteed they were pushing me to a place I’d never been before and would bring out the best in me. There were times we had to imagine we were tigers or rocket ships exploding off the wall and reaching for the matches on a dusty cupboard as we kicked off our old boots when doing backstroke. You can blame these coaches for much of my love of a good metaphor!

There were icy cold mornings walking back to school having already been up half a day and my hair would freeze from a pre school swim. Instead of heading out with my mates after school, off I’d pop on the train ready to swim some more. Swimming has taken me on travels around the world, I have tasted chlorine in many different countries and more recently salt water in some of the most beautiful places on earth.

Swimming has introduced me to some of the most wonderful people. Barriers are down when you are all in your bathers and a swimming hat. The shared huffs, puffs and giggles I know have made me the person I am today. All that was before I found masters swimming where ANY shape goes, and open water swimming where the fish replace the black line and the sense of achievement makes you feel warm and fuzzy for many a day afterwards.

Today I am a mum of 3 boys who still loves to swim. Due to juggling working, mumming, wifing, homing, and all that those things entail I don’t always get to swim with a squad and instead squeeze a dip in when I can. Along with keeping me sane, this had made me see many other people getting in and doing their laps.

I’ve managed to fit in 2 Rottnest (20km) solos in under 5.30, and completed eight other Rottnest Channel swims either as a duo or in team.

I won the female age group in the Gracetown swim, and the Busselton Jetty swim, a number of times.

Most recently I did the Paris Marathon so I could drink champagne in Paris!

Some have lots of self motivation and power up and down with gusto. Others do a lot of standing around at the end, looking for someone to chat to, seeking a way to put off doing another length even though all the hard work has gone into getting in to the pool in the first instance.

I see people exert so much effort to move through the water and I want to stop and tell them how with that energy, gusto and a slight stroke tweak they would go so much faster.

There are groups of girls who get together for a few weeks and encourage each other until someone misses a week and then enthusiasm dwindles. I see those who want to get back into swimming as they have entered an event for motivation and then those who stand on the pool side whilst their kids play, perhaps unsure what to do in the water, or maybe they have never really enjoyed swimming.

So Swimming Women is for all women who can swim, used to swim, want to swim, or have never swum. It is my attempt to capture the energy, passion and fun I have gained from swimming and share it. I hope you can join me.